Faith StoryCeasar Augustus Paita2022-07-29T10:56:30-07:00
Memories are Real Treasures
Improve your memory with award winning Vivolor® Memory Support!
Get your Memory Solution Now
Your Memories are Yours

Don't let them slip away

Learn more, Before it's too LATE
Previous
Next 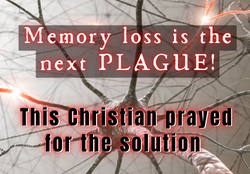 With the aging population, memory loss is a tsunami or plague threatening to overtake our society as the number struggling increases drastically. The enemy has gained tremendous ground through robbing minds – and this not only impacts the person with memory slippage, but everyone around them as well.

I know. I watched my beloved mother slip away. Mom was my best friend. I told her everything. I was closer to her than any person in the world. One day, I took mom for a walk outside my parents place and mom looks at me and says
"WHO ARE YOU?”
She doesn’t believe I’m her daughter!
I prayed that God would show me the solution to memory loss.
Learn More 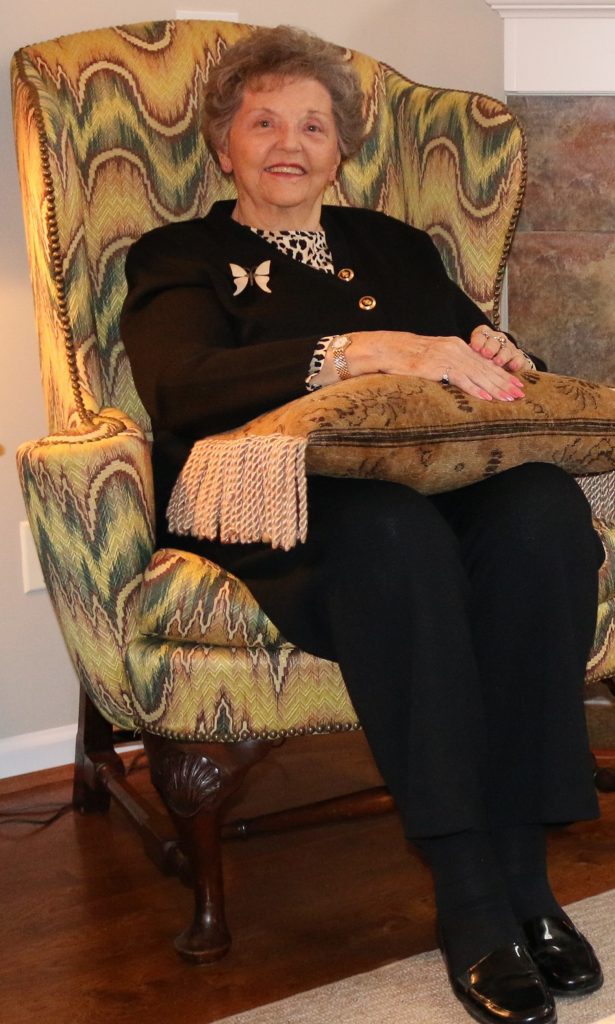 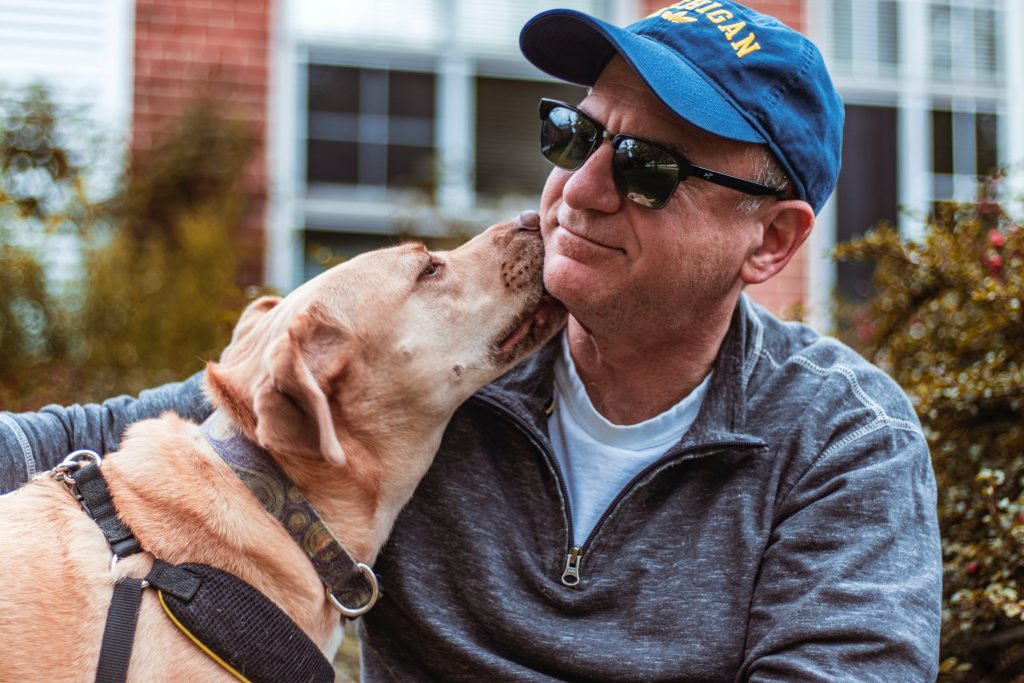 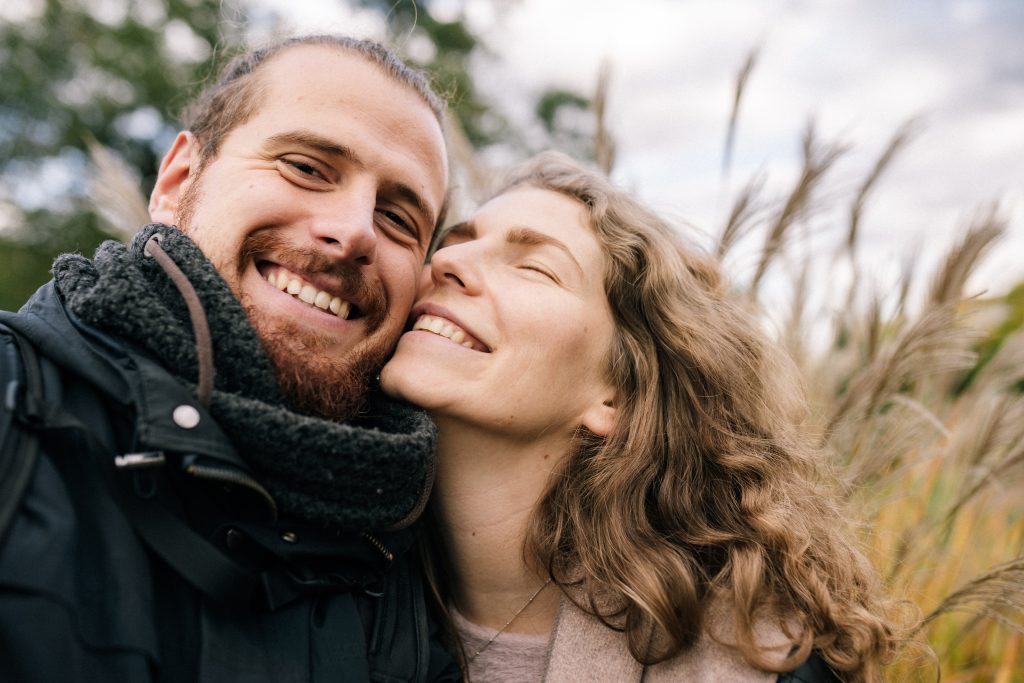 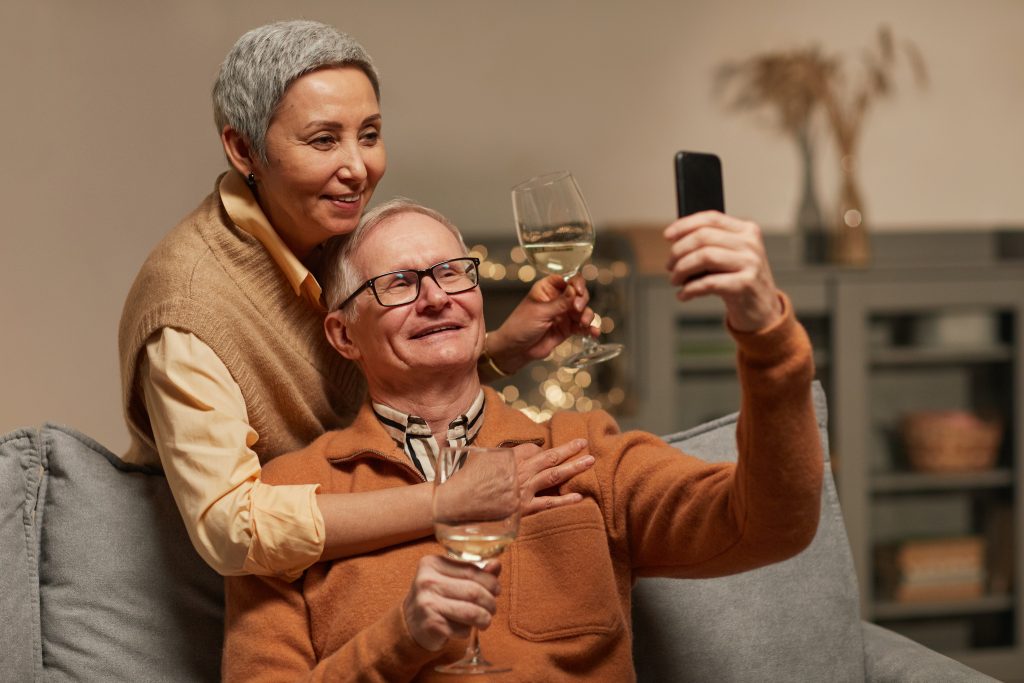 The company name has great significance

Lor is from Lord

Essentially, the company is named Living Lord Therapeutics, since it is His company 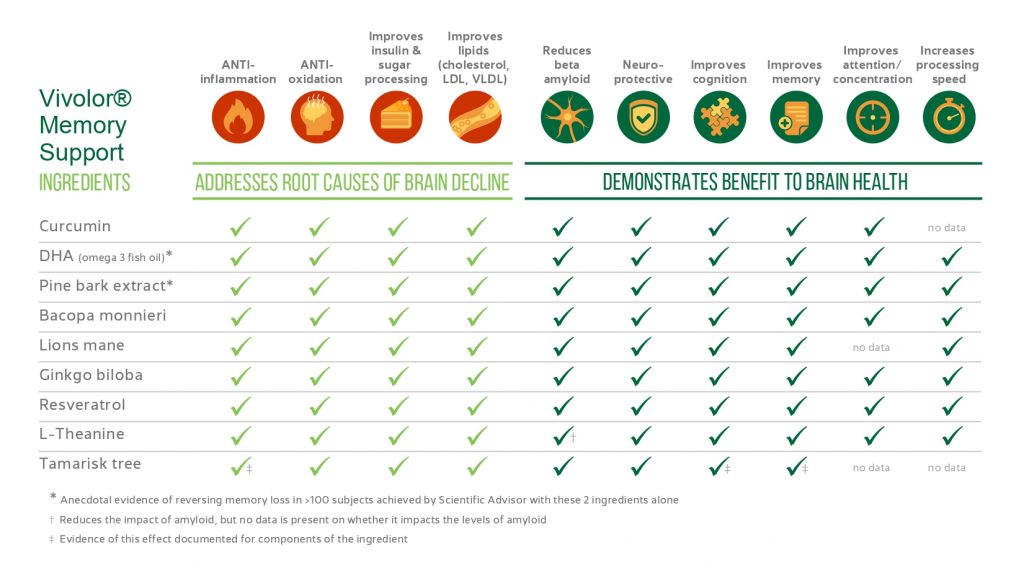 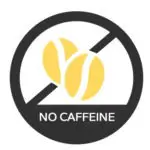 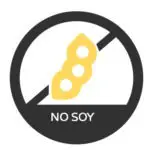 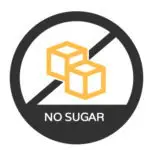 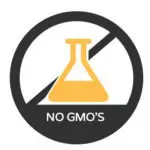 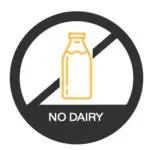 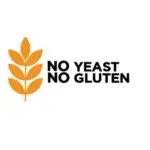 Imagine yourself having more energy, mental clarity, feeling happier and remembering names and recalling words more effortlessly. That is what others taking Vivolor® have experienced.
Boost your confidence!

“Within 3 days of starting Vivolor Memory Support I noticed major improvements. I no longer have brain fog. I remember things better. Processing thoughts is easier and I don’t forget halfway through a thought. I have a real improvement in energy.”

“I started Vivolor Memory Support ~ 8 months ago. I was in a tough situation! I was having a lot of difficulty with long-term recall and short-term recall. I tried other products – they didn’t work. Around month 3 or 4 using Vivolor, I really noticed a change in my long-term memory and facts. Memories just started coming back to me. Then around month 5 or 6, all the short-term things that I just could not remember all started to take shape. I have lots more crispness in focus and memory and wasn’t so forgetful. I am sold on Vivolor! I will continue taking it and notice improvement every single week!!”

“By day 3, I experienced notably improved vision and clarity! I had been rubbing my eyes for years and by 1.5 weeks on Vivolor I had seen a marked turnaround in my ease, clarity and focus when working at the computer. Vivolor restored my sense of taste and smell after 20 years, which honestly brought me to tears”

“I used to have bouts of brain fog and forgetting a lot of short-term things. Since being on Vivolor Memory Support, I no longer have brain fog and I have more clarity. It really has helped!"

“Increased clarity and word and name recall. Quite exciting really"

Will Vivolor® work for me? 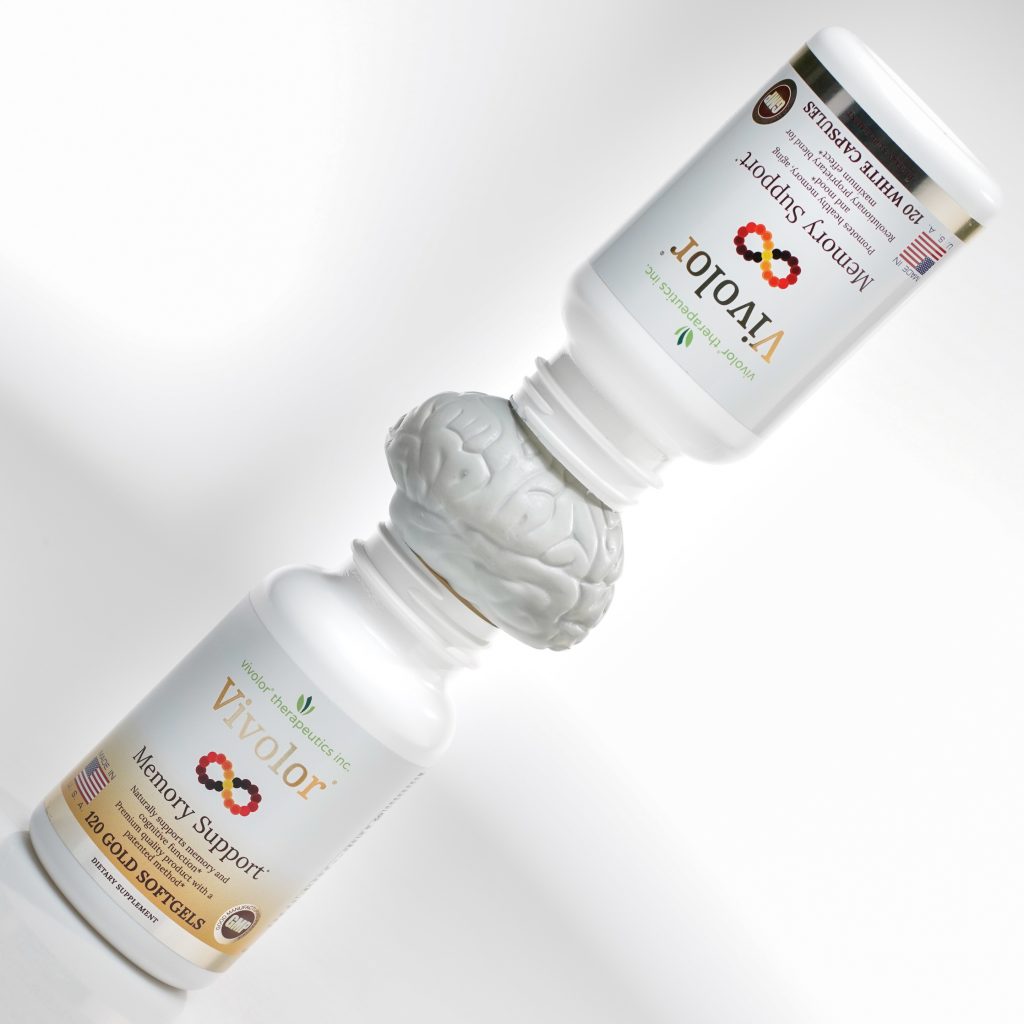 Vivolor® Memory Support has helped those with: 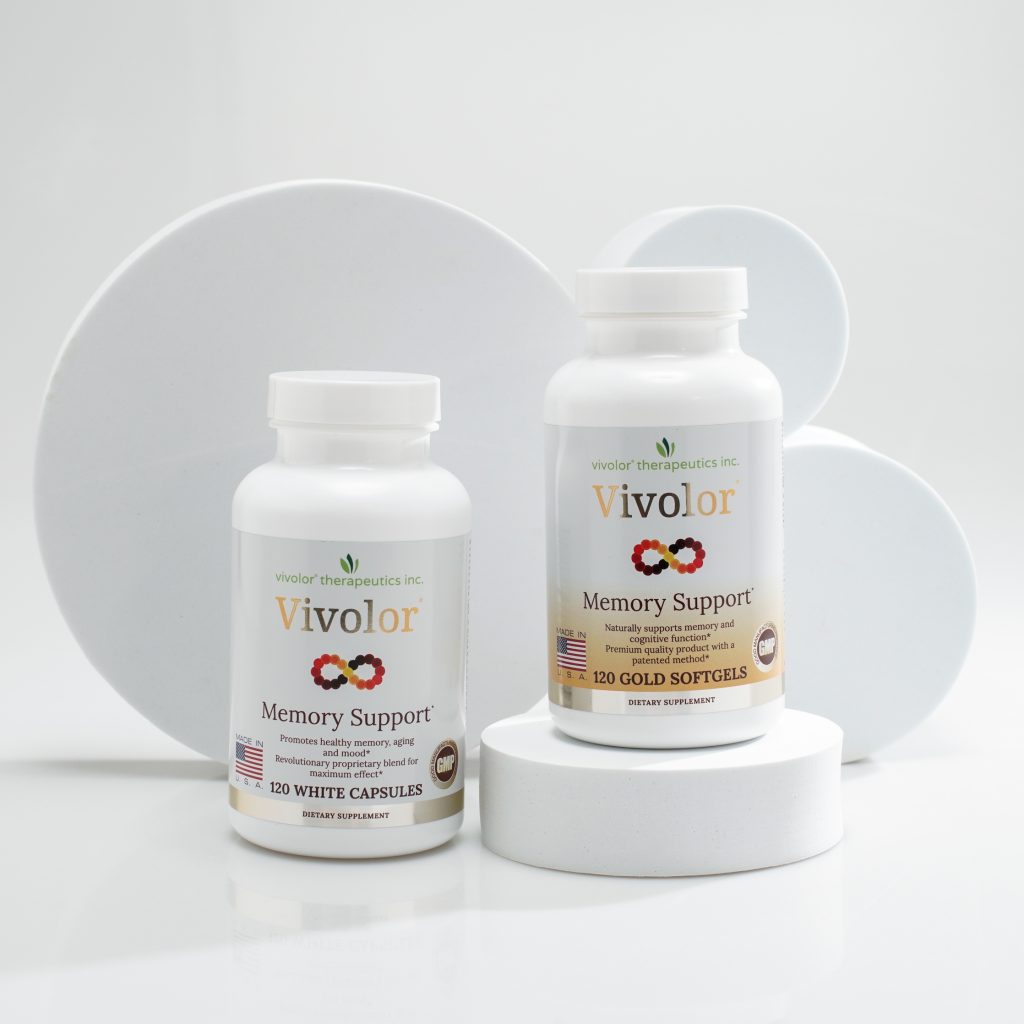 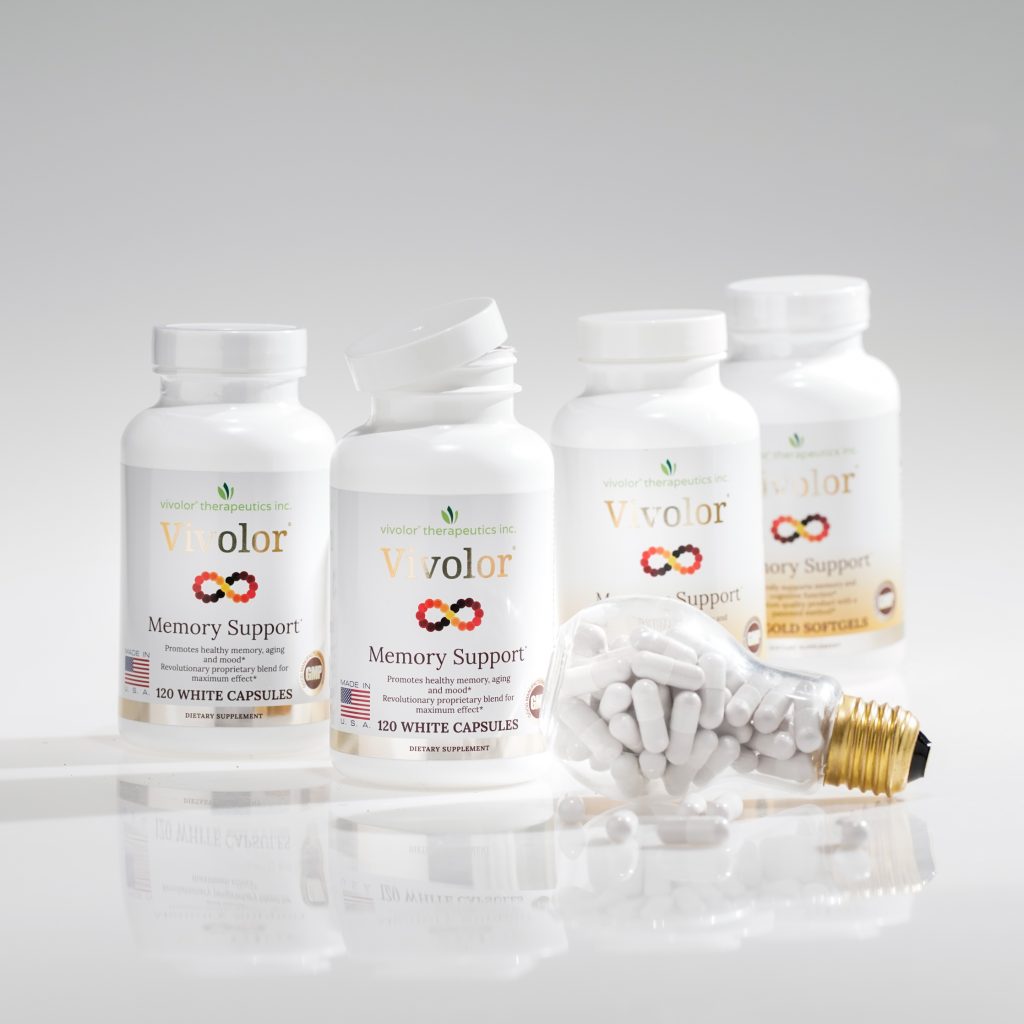 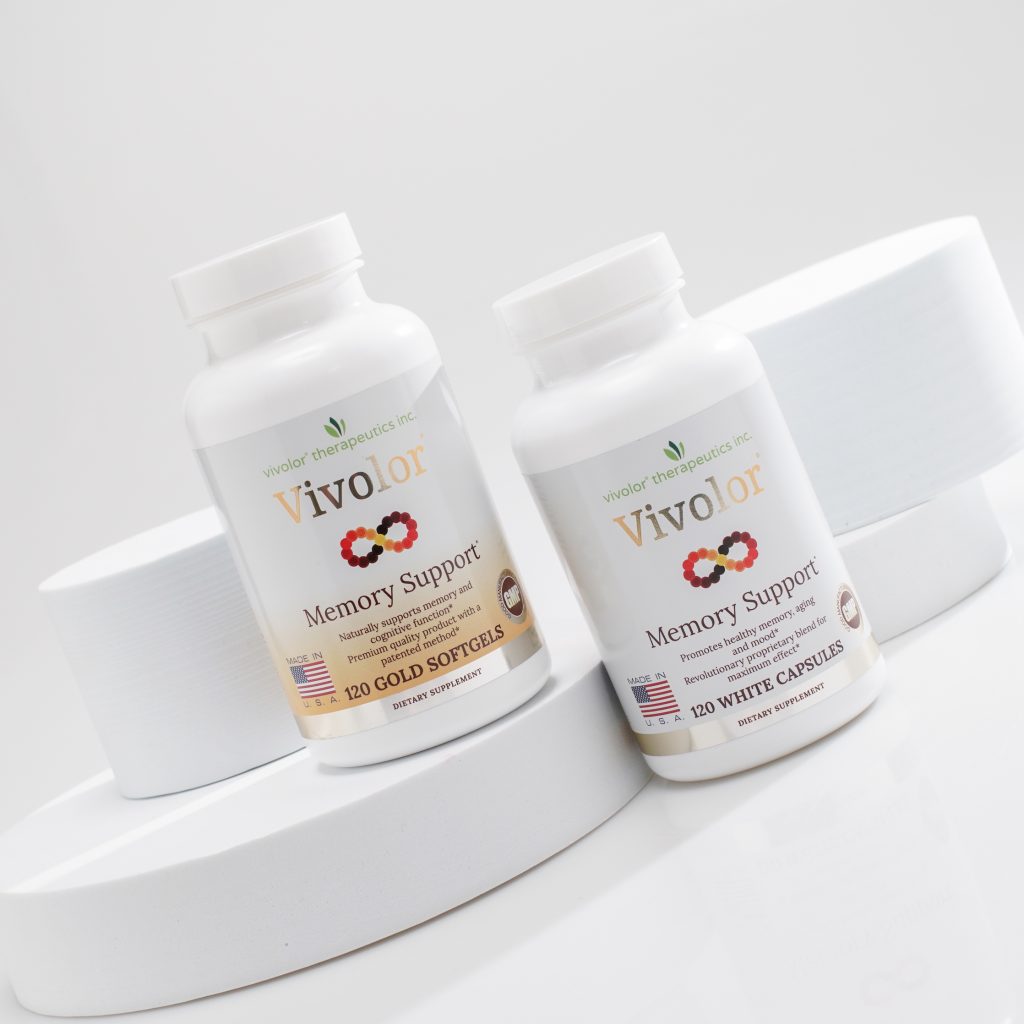 Are you at Risk for Memory Loss?

The following factors increase the risk of memory loss. Anyone over the age of 45 or with any of these risk factors should be taking memory supplementation daily. The more risks you have, the more critical it is to take action. 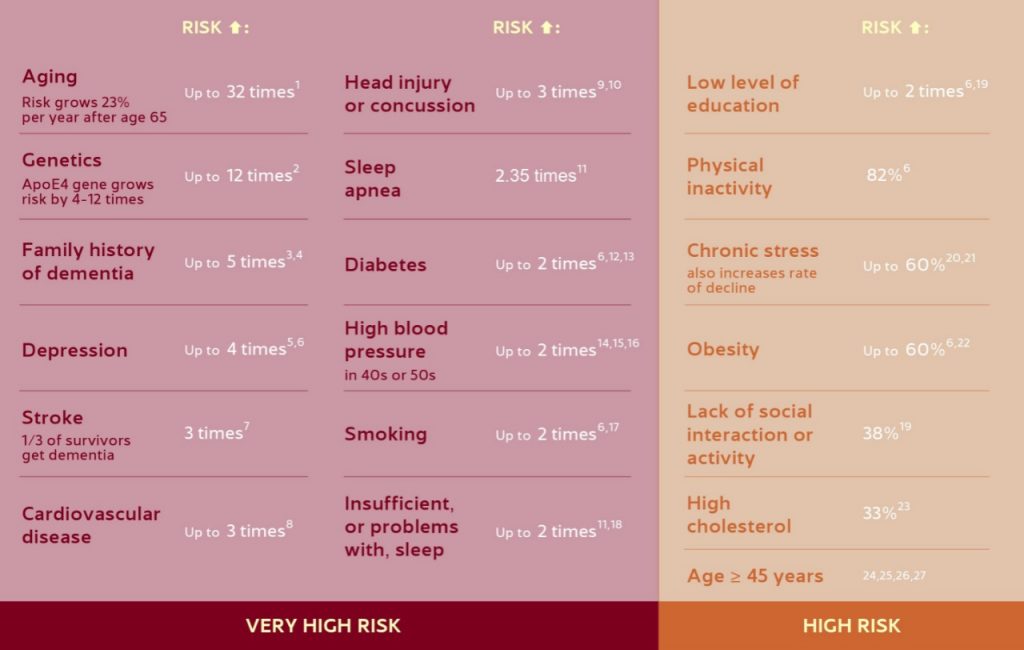 An omega 3 oil that is naturally occurring in your brain and is critical to normal brain functioning. After age 20, your levels of DHA decline. You cannot make more DHA, so you must consume it. Low levels of DHA have been associated with cognitive decline. DHA levels are greatly decreased in Alzheimer’s disease. Numerous studies have shown cognitive benefits of taking DHA daily consistently over time. Some studies show better cognitive performance with higher blood levels of DHA. In fact, those with the highest blood levels of DHA in one study had half as much dementia! Vivolor Memory Support contains generous amounts of DHA (2000mg per day) that are higher than most other DHA supplements and 10 times more than many fish oil products. In clinical studies, DHA showed improvements in various aspects of memory and brain function including visual memory, abstract skills, immediate recall, short term memory, working memory, verbal memory, semantic memory function, delayed recall, non-verbal reasoning, mental flexibility, vocabulary, attention, speed and executive function.

An amazing supplement with numerous health benefits to energy, mood, heart, anti- aging as well as to brain performance. It helps with creating new neurons. Scientific studies have shown that curcumin enhances cognition, attention, alertness, psychomotor speed and memory. It also improved accuracy, math, and contentedness. The Achilles heel of curcumin is that less than 1% of native curcumin is absorbed by your body. Vivolor contains a patented, branded form of curcumin that is 185 times better absorption (the best absorption available). Vivolor also contains generous doses, yielding more effective curcumin than almost any other product.

A well-known supplement used in Chinese medicine for 1000s of years for its benefits to cognitive function. A form of gingko is approved by the regulatory authorities in the EU for the symptomatic treatment of adults with cognitive impairment and mild-to-moderate dementia.

Helps protect nerves and has numerous studies. 289 studies in humans showed it has the potential to improved multiple aspects of cognition including memory, processing speed, learning, intelligence, and reduced forgetting.

An amino acid that plays vital roles in brain performance. It has been shown to increase attention and alertness, reduce stress and anxiety, reduce mind wandering, and increase mental clarity.

A powerful anti-oxidant that contains quercetin and bioflavonoids found in green vegetables, fruit, nuts and beans.

Naturally occurring in grape skins and berries and is neuroprotective against cognitive impairment. In many studies, it delayed age-related cognitive decline and enhances brain health through a number of different mechanisms. It has also been shown to promote heart health, encourage healthy insulin sensitivity and mitochondrial function and has anti-aging properties. 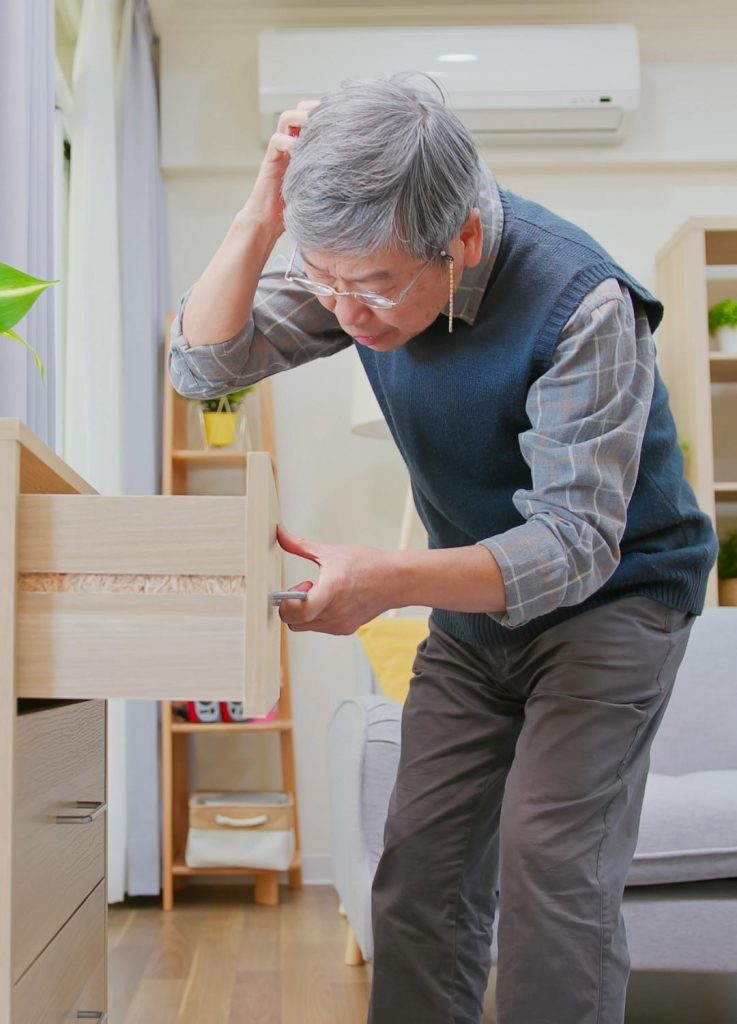 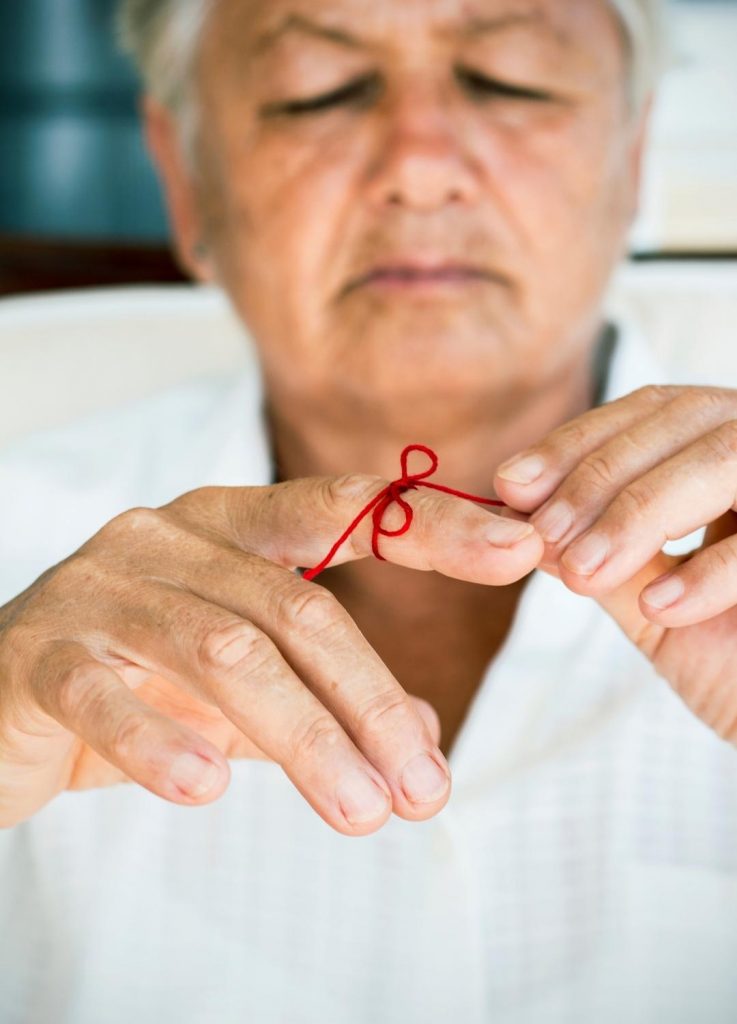 Feel proud of yourself for taking care of yourself, doing something healthy and investing in your future–you deserve it!
Picture yourself having more energy and motivation, feeling good and being ready to take on the day and the new challenges it presents. 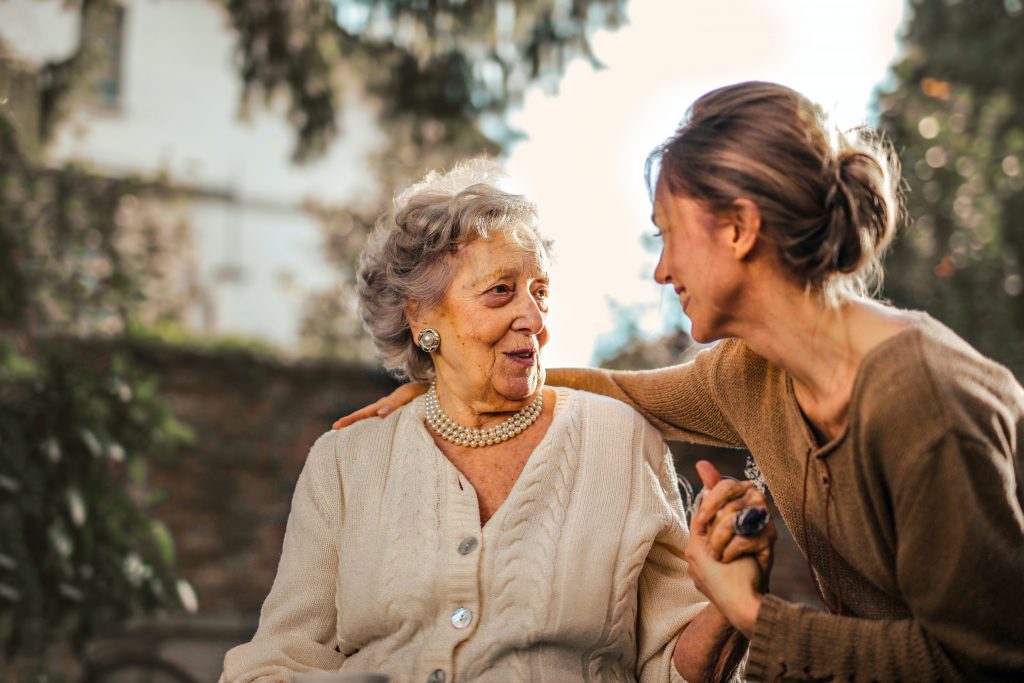 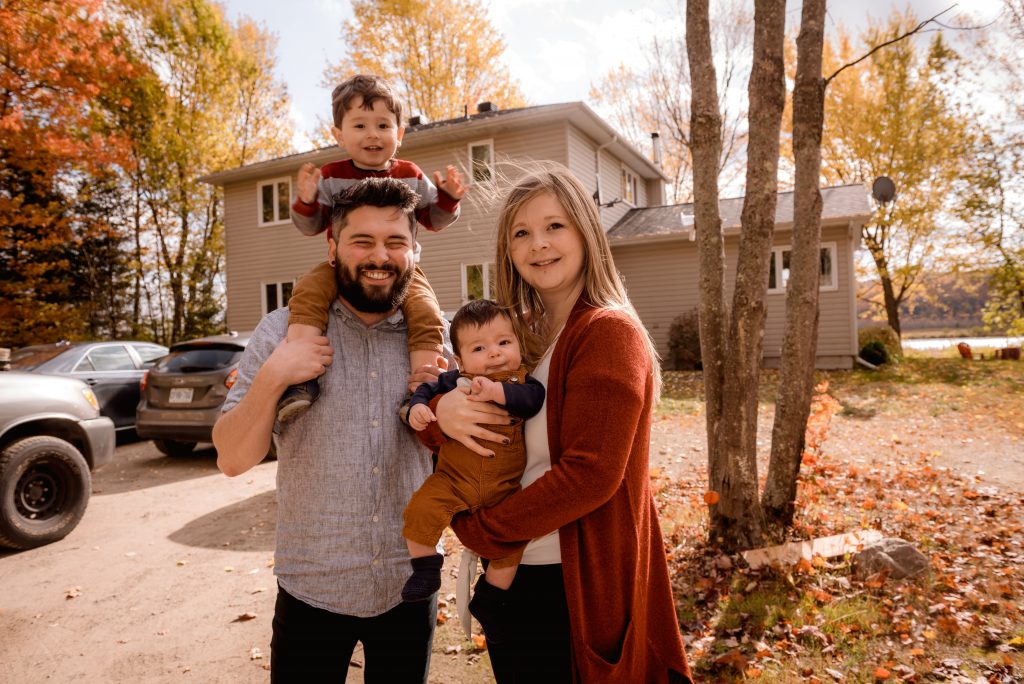 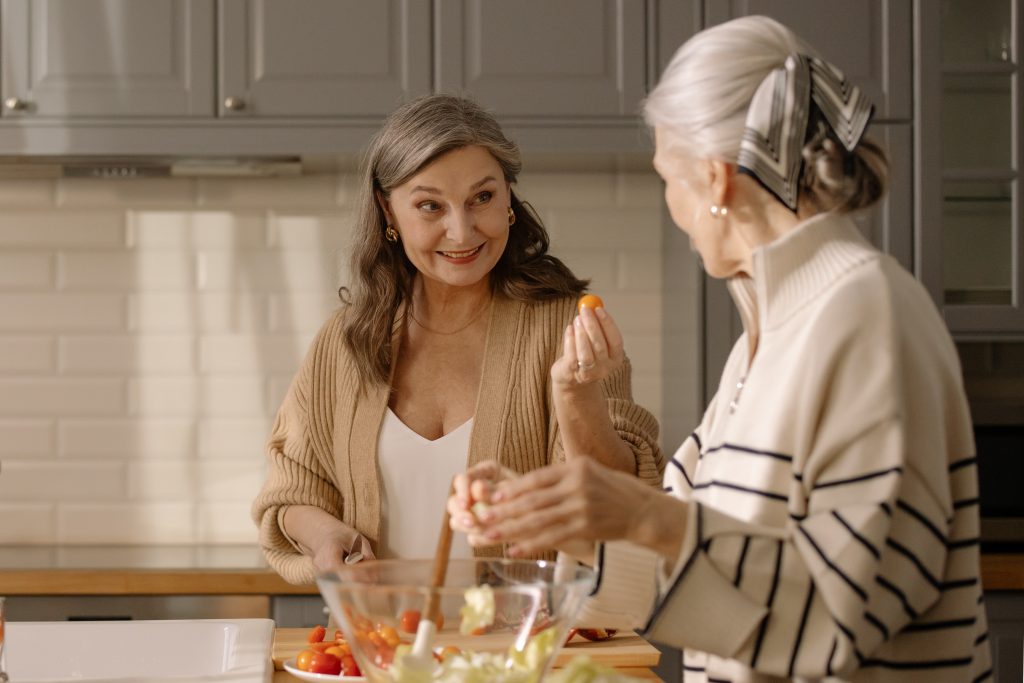 Don’t wait until your memory becomes a crisis. The negative changes in your brain have typically been going on for over 20 years by then!

Have a sense of relief knowing you are taking the most comprehensive product with generous brain nutrients. Imagine what is possible when your brain is functioning well and you can lead the life and have the future you have dreamed about.

*Disclaimer: This product is not intended to diagnose, treat, cure or prevent any disease.

*Disclaimer: This product is not intended to diagnose, treat, cure or prevent any disease.